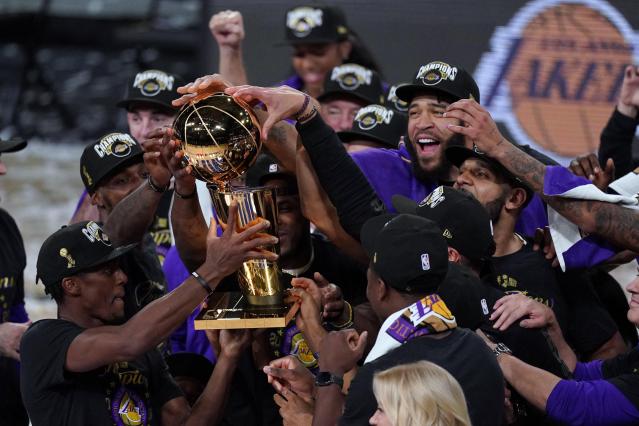 The Lakers last won the NBA title 10 years ago with the legendary Kobe Bryant. Credit: bleacherreport.com

They continuously impressed the public in the playoffs by defeating all of their opponents 4-1 in each series respectively. The NBA finals were no different as Lebron James and Anthony Davis continued their top form that led their team to victory.

Game one and two were phenomenal performances from the Lakers as they won with a 116-98 and 124-114 score. Game three was taken by the Heat as they won with a score of 115-104. Game four was again won by the Lakers, and it appeared to be an easy final because they needed one more win to clinch the championship.

Game five was very close but the Heat got the victory, beating the Lakers 111-108. The series was 3-2 in favor of the Lakers, but there was pressure on them to not lose as the Heat had the opportunity to make the series go all the way to game seven.

All eyes were on the Lakers in game six as it started close, but the Lakers took the first three quarters and the second quarter was by far the more dominant team in the AdventHealth Arena. It seemed to be over for the Heat already, but they kept fighting and went on to be dominant in the last quarter.

It was the only quarter that the Heat would take in the game; Heat forward Jimmy Butler had only 12 points and the player that had the most points for the Heat was Bam Adebayo.

It was a disappointing performance for Butler as he had had better performances in the past games against the Lakers when he got 40 points in game three. As we now know, the last quarter wasn’t enough to catch up in total points as the Lakers won the game 106-93 and the series ended 4-2.

Anthony Davis scored 19 points and had three assists in the game while Lebron had 28 points and 10 assists which led to him being named the Finals MVP. Lebron is now the first player in NBA history to be named Finals MVP with three different teams, the other two teams included the Cleveland Cavaliers and the Miami Heat.

This victory is also his 4th NBA championship ever which includes two with the Miami Heat and one with the Cleveland Cavaliers. It was a special night for Lebron, and the victory was not just special because it was the Lakers’ first title in ten years, but because it was a victory for the legendary Kobe Bryant.

Earlier in the year, the news of the passing of Kobe Bryant left many Lakers and basketball fans in disbelief and grief. The sports world was in pain after the death of Kobe and this Lakers victory was the perfect tribute for this iconic player.

Many Lakers fans stormed into the streets of Los Angeles with many wearing Bryant’s iconic number 8 and 24 jerseys. It was a special day for the city of LA and the Lakers of course.

As for what is to come next, the new NBA season is returning in late January 2021. The Lakers will be looking to defend their title and win back-to-back next season while Lebron looks to win another NBA championship.